You are here: Home / Archives for fruit 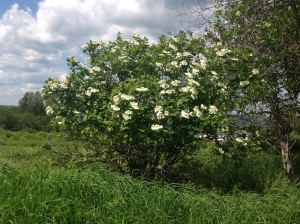 Well, we fell behind with updates because we were so busy doing them, there wasn’t time to write. Or we were tired. This stuff is exhausting!

It turns out summer in the country is very green and hot. Luckily, up on the ridge there is a constant breeze.

So, we moved some of the bulbs and plants we found near the front of the house. Those were moved to a carved out space in the back, which quickly sprouted the most clover I had ever seen in one spot. And then the plants took off as well as the weeds.

One weekend I went around with the weed whacker and the next weekend looked like I had never even tried. So many of the established bigger bushes are so overgrown and crowded it is going to take multiple years to get it sorted out. For now, we are in clean up and maintenance mode, cataloguing what we have and deciding what to do with it all.

Below is a gallery of flower pictures taken over the summer. Included are, in no particular order:

Not included are some that didn’t flower, like the horribly overgrown daffodil bunches, a lone tulip, some potential day lilies (the smaller yellow ones), and the larger rose bush that we moved, which hasn’t fared well. There’s also at least three flowering bushes I haven’t been able to identify yet.

Also our white hydrangea tree has recently bloomed. I call it a tree because that’s how large it is.

In addition there are 5 or 6 kinds of overgrown apple trees near the house, including a flowering crab, and we recently found a pear tree hiding. While small and somewhat malformed, it does has actual fruit. We also found some commercial strawberry plants that the animals got to before we could, and some raspberry & gooseberry plants we were able to harvest.

One of the biggest issues with all the overgrowth is disease, since the crowding keeps some of them damp and dark enough for all kinds of things to happen. This fall there will be a lot more cleanup and next spring, a LOT more heavy pruning.