You are here: Home / Archives for News

Well, it was time to pull the trigger – today we’re launching a new site of ours, WP eBooks. Right now, there’s two plugins with accompanying e-books for sale. Both are pretty awesome. Our aim is to provide high-quality specialized plugins with extensive documentation and intense support. We plan on adding more in the near future and hopefully highlighting e-books relating to WordPress from other vendors. Since the domain name is similar to an existing product, we also added a section on the home page linking back to wpebook.com from Kyle Eslick, which will hopefully eliminate any confusion between the two.

The site itself is a single WordPress installation running BuddyPress for the private support forums. I did use some custom slugs. We’re also using the Genesis Theme Framework and the upcoming version of Genesis Buddy.

Did you hear we had the bestest time in Montreal? We had bagels, we walked *everywhere*, we met loads of awesome people and I got to practice my horrible French.  Oh, I did a presentation too. For some reason, I was the only person in that time slot. I spoke on what is probably now my go-to session, Domain Mapping in 3.0. In the awesome words of Matt himself on public speaking, “Know your material cold,” and this one I do.

Which was good, as for some reason the Montreal version of my talk was not on my netbook, just the one I had used in Chicago. Also, this was probably the most fun I have ever had on stage. Someone tweeted that it seemed like a stand-up routine, but they meant that in a good way. 😉 So did I. My daughter also heckled me from the audience. (That’s okay, I made her wave to everyone.)

I know someone was videotaping it and I hope it makes it online, as it rocked. If and when I get a link, I’ll include it here. Montreal: A++, would WordCamp again. 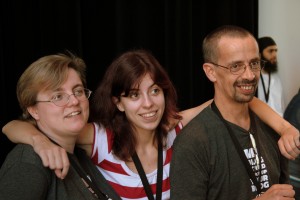 At WordCamp Montreal, August 28-29, 2010, my session was Tweaking plugins to be 3.0 Network-Compatible which was a live coding demo. The plugin that I chose to use for this was AdServe which has not been updated in over 2 1/2 years. You can download my updated version with all the edits from the presentation: [download#1]

Huge thanks go out to @Digibomb, @JeremyClarke & @cafenoirdesign for an awesome job of organizing the event. 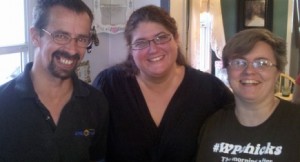 Finally, our new design is live! Built on the Genesis Framework from StudioPress and designed by Rebecca Diamond, who took my vague ideas and ran with it. Even though this is the third design of the site, this time it really suits us and conveys the feeling we wanted to express: one of warmth and friendliness, yet still professional. Plus it feels like home to us, with details similar to our living space.

Our strong suit is code and education. We thought for our own site, we’d leave the design work for those far more talented than ourselves. 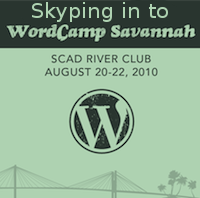 Jane wells and I figure this is probably the first time someone has tried this, but we’re up for the challenge. I’ll be Skyping to speak at WordCamp Savannah on August 21st. My talk (with Jane’s help) will be about the top ten or so plugin for multisite and running a WordPress Network. You may have wondered about this new feature and what you can do with it. Hopefully, seeing a few snazzy plugins available will spark some ideas.

My work schedule and travel budget conspired to keep me from being there in person. That, and I am a delicate winter flower that wilts in high heat and humidity :D.

August 28th both Ron and I will be speaking at WordCamp Montreal. I’ll be talking about enabling the network and domain mapping, while Ron will be digging deep into code and go over how you can write plugins with the network / multisite in mind. We’ll be driving up, as it’s the closest WordCamp to where we live and a “short” 7 or 8 hour drive. Added bonus is we’ll be bringing our daughter Sarah who is studying to be a graphic designer at the New Brunswick College of Craft & Design. So if you see us there, be sure to say hi and give her plenty of advice.